Our society has become one in which we find it easier to replace products instead of repairing them. Nevertheless, civilization never used to be like this. Before industrialization and the invention of plastic, the world was a very different place.

In addition, whereas before, everyone cherished what they had, now the majority of the world’s population solely cares about accumulating as much stuff as they can; falsely thinking it will make them happier.

And the worst part is that these bad consumerist habits are having a huge impact on the world. The planet is suffering because of our ignorance and because we choose ‘convenience’ over what’s better for the planet.

What Does ‘Throw-away Society’ Mean?

Essentially it’s the way in which society finds it easier to throw away things and buy new ones than to repair what is already there. It also refers to the fact that so many things in the world, are made to be used only once and then be thrown away. Take coffee cups or plastic cutlery for example.

Now you may be wondering, what caused this switch. How did we become a so-called throw-away society?

What Caused This Throw-away Society?

There are many factors at play that drove these habits to become the norm. It’s a mixture of our desire for profit and our desire for more stuff that has transformed our society into what it is today.

After industrialization, it became easy to start mass-producing products. Factories allowed us to produce large amounts of the same product more efficiently and at a cheaper price. Before this, products were handmade and handcrafted by people. Not machines.

Machines are doing most of the work for us now. They can work all day and all year round. Working non-stop to produce more products and more profit for companies. For instance, Coca-Cola sells around 1.8 billion bottles a day. These plastic bottles are only used for a few hours by the customer before throwing them away. The sheer amount of plastic bottles produced would not be possible without advanced machinery and technology.

The Invention of Plastic

Plastic has become a very cheap material. It’s one of the reasons why plastic has taken over the world.

Its cheap cost is what has allowed companies to use it for so many of their products. Either for the packaging or for the actual product item. Even though plastic has many desirable properties, the way we are using it is very unsustainable

It surrounds most products when you walk into a shop in the form of packaging. And most disposable products like cutlery, razors, and toothbrushes are made from this non-biodegradable material too because it is easy to produce.

The Rise of Disposable Products

In our society, we find it easier to buy another water bottle instead of refilling the one we already have. And we find it more convenient to using a disposable plastic fork rather than reusing the one we have over and over again.

And this mentality has only worsened since the development of online shopping.

Because of Amazon and all the other e-commerce stores on the internet, everything is disposable to our eyes. It doesn’t mind if something breaks, we can simply order another one with a few taps and it will arrive at our front door the next day. No one could have predicted technology reaching this point.

Another big driver of this throw-away society is advertisements.

No one can avoid advertisements in the modern world. Whatever you do and wherever you go, it’s inevitable that you will encounter ads. On YouTube, on Spotify, on nearly every website, in stores, on the street, on the train, and basically everywhere.

These adverts are telling us that we need more and if we don’t buy their product we will feel inadequate. They are making us tie our emotions and happiness to how much stuff we have and how expensive our cars are.

The sole purpose of advertisements is to lead people into stores. They have transformed the way society works, to say the least. It has changed the way we think. And once again it’s all about profit.

Uneducation and ignorance are equally important when talking about this issue. There are people who don’t even realize the problem that exists. That don’t even think of the impact of disposable products or plastic on the planet. This is why education and awareness is key. People won’t do anything if they don’t know that they are part of the problem.

Effects of a Throw-away society

Apart from making the rich, richer. A throw-away society has little to no benefits. Some would argue it’s more convenient but it’s all about changing habits. Before making the switch, taking a reusable bag with you to the supermarket every time seems tedious. But those who do it, don’t even think about it. It’s normal to them. What we call ‘inconvenience’ is actually the unwillingness to change our old habits.

Most of the effects of a throw-away are negative. It is destroying the natural environment and the planet as we speak.

First of all, it contributes to the depletion of natural resources.

We are currently in a linear economy. So we take natural material from the earth, make it into products and in the end throw them in the bin. As we are recycling a very small percentage of these materials, natural resources continue to be extracted and harvested to make new products. Only for them to be thrown away in a matter of days or hours in many cases. The fate of most rubbish is the landfill. Rubbish is piling up on our land and on ocean floors and few seem to care.

Moreover, plastic does not biodegradable as you probably know by now. It stays in nature for hundreds and hundreds of years only to degrade into smaller and smaller pieces. Also known as microplastics.

We have changed the face of the earth forever. Now plastic is even found in our bloodstream which is a very scary thought.

How To Move Away From A Throw-away Society

Unfortunatley, there’s no magic solution to this problem.

I don’t know what it will truly take to move away from this throwaway society. Because it will require everyone to change the way they think and their habits as well as companies changing the way they operate.

If we wish to live in a better society, companies must adopt more sustainable mindsets. Sadly, few are changing to adapt to the times as profits remain their main priority.

The biggest problem is that people love stuff too much. We associate our worth and happiness with the amount of stuff we have. And we think that the solution to all our problems is buying something new.

We changed our habits once, we can do it again.

Sometimes, I wonder if it’s even possible to move away from these habits and the throw-away society we have created. Because if everyone is not willing to change, then nothing will change. And if our habits don’t change, then companies won’t change either because they are just looking for profit.

It’s important to think about the long-term and the future because if we don’t do something fast, then the world will be in serious danger. The world will be overrun by waste and who knows how much forest will be left or how many animals will have gone extinct.

The future is not set. We can change it. One person at a time. And one company at a time. It will require global corporation. This is vital to our survival and the survival of all other organisms here on planet earth.

To be frank, it seems overwhelming. Sometimes, too overwhelming. But we need to trust that we are playing our part and hopefully will inspire a friend or two along the way.

I've always cared about the planet but never knew how I could use my skills to create an impact. But that's when I decided to start Terra Movement. To get other creatives involved in the climate movement and inspire more people to help the planet and its people. 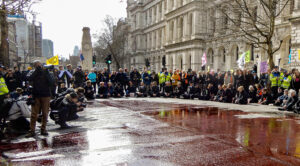 This Is Why We Need More Imperfect Activists

What Is Conscious Consumerism & How Can Buying Better Shape A Better Tomorrow?

How We Became A Throw-away Society